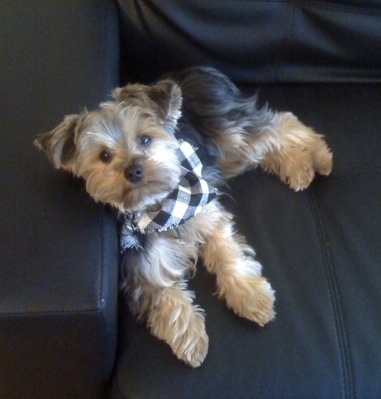 So Dexter is 1 day away from being a year old (Sept. 22, 2011) When Lee and I came to your place last year in November we were only there to just look at the puppies. We had already decided we wanted a yorkie but we wanted to have a look around at a few different places before we picked one out. We got there fairly late that night and there was another two people there looking at a yorkie as well. You only had 2 left at the time. When I saw Dexter we knew he was the ours. The girls tried to claim him as there’s but you pointed out to them that they already chose the one with the ears sticking up. Dexter was excited and running around, even hitting the table a few times (which he still does to this day). As you were talking to the girls with the other puppy we decided Dexter was ours and had to run to the bank because we didn’t think to bring any money. He had a slight cough but you were prepared and sent us home on our way with our new pup and medicine to make sure he was alright. You even messaged to make sure his cough got better, which is amazing considering most places would give you your dog and just send you on your way.

Out of all the dogs that my family members have Dexter is clearly everyone’s favourite. Not only is he probably the cutest but he is the best behaved dog as well. Thank you so much for all your help when we got Dexter and for giving us an amazing addition to our family.